Students at all three schools returned to the classroom, with Hutchinson welcoming new principal S. Beadles and Boyd welcoming former Centennial assistant principal, now turned principal, K. Gibbons.  All students experienced breakfast in the classroom for the first time.  This is a new effort launched by APS’ nutrition department.  Transportation reported that all buses arrived on time and as scheduled.  Principals at all three schools expressed excitement about the beginning of the year round school year.

“Today went better than I could have ever expected,” said principal Gibbons.  Boyd elementary hosted a 1:30 school wide meeting to introduce their new principal to students and parents.

The lobby of Centennial elementary was filled with a dazzling number of potted green plants.  A beautiful compliment for their atrium which was filled with natural light and wide eyed kindergarten students, excited about learning how to walk in a straight line.  “Watch your lips and your hips,” said a kindergarten teacher as they walked, causing the 5 and 6 year olds to giggle.

Hutchinson utilized their Spanish language instructor to help principal Beadles greet students from the neighborhood.  Newly appointed SRT-2 Director Danielle Battle was also on hand to greet parents and students with hugs.  Students began the day with an assembly then walked to their assigned classes.  Beadles, a former science model teacher leader, was also excited about using social media this year to communicate with her students.  “I’m still learning how to tweet,” she said.

Superintendent Erroll Davis visited all three schools during the day, spending a great deal of one-on-one time with each principal.  Parents were kept up to speed throughout the day with live tweets from the @apsupdate Twitter feed.

Day One APS for traditional schools is Monday, August 8. 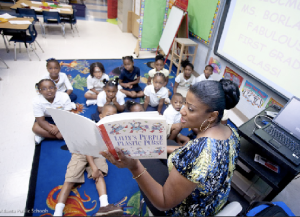