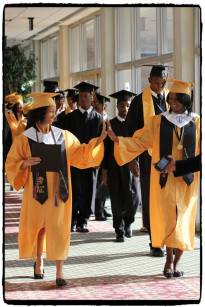 During the month of May, Atlanta Public Schools hosted commencement ceremonies for each of its 10 high school campuses.  Over the course of a week, the district proudly welcomed into the alumni ranks, nearly 2,000 graduates from throughout the city.

Parents and friends in attendance were treated to reflective speeches by seniors who spoke of overcoming obstacles and seizing opportunities while learning the values character and fortitude along with their daily academic lessons.  Well-wishers who could not attend, were invited to follow along in real-time via the district’s social media channels and afterwards, the public was encouraged to view ceremonies and speeches on  APS’ cable channel 22.

The class of 2013 earned college scholarship offers of more than $100 million, an increase from approximately $87 million earned by the class of 2012.

To view images from or hear an audio recording of every graduation, click on the following link: http://www.apsk12.org/media/MEDIAMain_GRAD_splash2013.html.

Congratulations to the class of 2013.  APS teachers, leaders and staff wish you much success.