ie Missick has been selected to receive the 2014 Positive Coach Award. The award is in recognition of a coach who is a role model for his or her team and reinforced the “Seven Definitions of a Positive Athlete” as defined by Positive Athlete Georgia. Those definitions include an optimistic attitude, teammate encouragement, servant leadership, heart for others, ability to admit imperfections, giving 100 percent all the time and realizing the team as more important than the individual.

Coach Missick started the Cross Country team at Coretta Scott King High School three years ago. Since it’s implementation, the CSK Cross Country program has seen regional runner-ups and runners have made it to the state championships two consecutive years in a row.

“She is an example of a coach that doesn’t just go through the motions of coaching her team. Coach Missick is a positive role model that gets up with her girls at 6:30 in the morning to ensure their success, “ said Scott Pederson, president and CEO of Positive Athlete Georgia.

Coach Missick goes above and beyond for her program and her girls have consequently been successful. 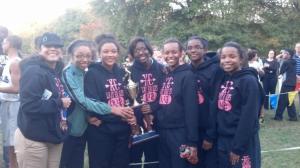 Congratulations to Coach Valerie Missick on this notable accomplishment.

Positive Athlete, a subsidiary of parent company Celebrate Positive, LLC, is a group of high-character professional athletes who have teamed up to promote the benefits of positivity to young athletes around the world. These athletes believe it is crucial to begin shaping the futures of young athletes for life skills beyond athletic competition. Positive Athlete Georgia mirrors the successful program put together in Pittsburgh by Pederson and Ward http://pittsburgh.positiveathlete.org. Positive Athlete Georgia’s website (http://georgia.positiveathlete.org) is designed to tell positive stories about the kind of role models our young athletes should aspire to be.