Benjamin Song! “Ben,” as his friends call him, appeared unflappable as he spelled “V-I-G-I-L-A-N-T-E” and secured the victory after nine harrowing rounds of spelling. Ben, a fifth grader at Brandon ES, will represent Atlanta Public Schools in the District 4 Bee, which will be held Saturday, Feb. 27, at North Atlanta High School.

Upon being declared the winner, Ben exclaimed, “This is great! I can’t believe I won! At first I wasn’t going to participate in the Bee, but my teacher, Ms. Brown, said that I should try; so I did and I won. Wow!”

When asked how he practiced, Ben stated, “I see the words in my head. I visualize them and then spell them in my hand before I spell them out loud. I can actually see [words] them.”

“I am so proud of Ben and all of my students,” Brandon ES teacher, Ms. Brown said. “I assigned the spelling list to the entire class as homework for the week, no exceptions. Ben initially didn’t want to participate, but once he started practicing he began to show real interest; and now here we are—he’s representing the entire system! I’m so proud of him!”

Maya Ratchev, from Jackson ES, was named the second-place finalist; showing great spelling prowess as she advanced to the final round.

Dr. Zackory Kirk, APS Literacy Coordinator for grades 6-12, and this year’s spelling bee coordinator stated,“The spelling bee is a great opportunity to recognize some of our most studious learners. It also builds community within classrooms and schools while incorporating the family and community into the work of educating the whole child.”

Special thanks to this year’s distinguished judges: 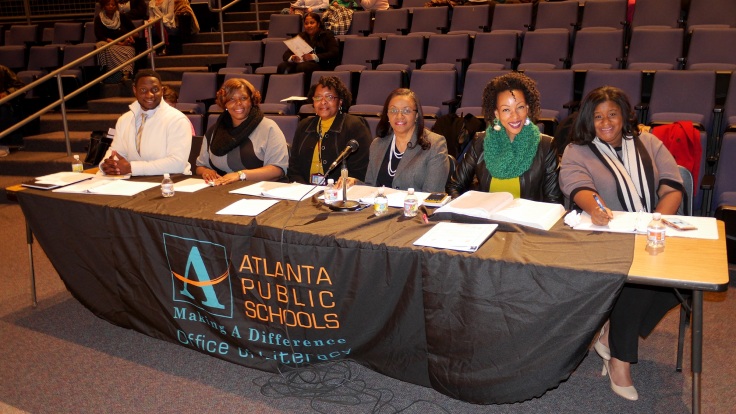 “Congratulations to all of our spelling juggernauts. We wish Ben and our four APS Bee winners great success in the next competition,” -Atlanta Public Schools.

The top two finalists from District 4 will advance to the state spelling bee, which will be held on Monday, March 18, at Zoo Atlanta. The state winner will then advance to the National Spelling Bee in Washington D.C., which began in 1925.