Pilkey did not disappoint. During his visit, the popular author captivated students’ attention by sharing stories from his childhood and drawing such favorite characters as George Beard and Harold Hutchins, Captain Underpants, Dogzilla, Petey the cat, and Dog Man. In addition to giving away the drawings and reading excerpts from “Dog Man,” Pilkey personally donated more than 400 signed copies of “Dog Man” to every student at the school. Students also squealed with delight to learn they’ll have the opportunity to select their own book from a virtual book fair.

“This was extraordinary and mind-blowing,” said Christine Tigue, media specialist at Hope-Hill. “We were so excited to have Dav Pilkey here. Our kids began studying and reading his books more than one month ago to prepared for his visit, so to have him here was like a dream come true.”

Pilkey shared his personal journey as a young child growing up with attention deficit hyperactivity disorder and dyslexia, and how despite those struggles and countless setbacks, he never gave up. He encouraged students to do the same.

“I sometimes still get discouraged,” Pilkey told the captivated audience of students and teachers. “But, I’ve learned that you always have to try your hardest and do your best.” 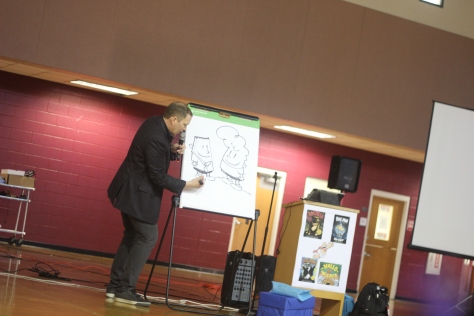 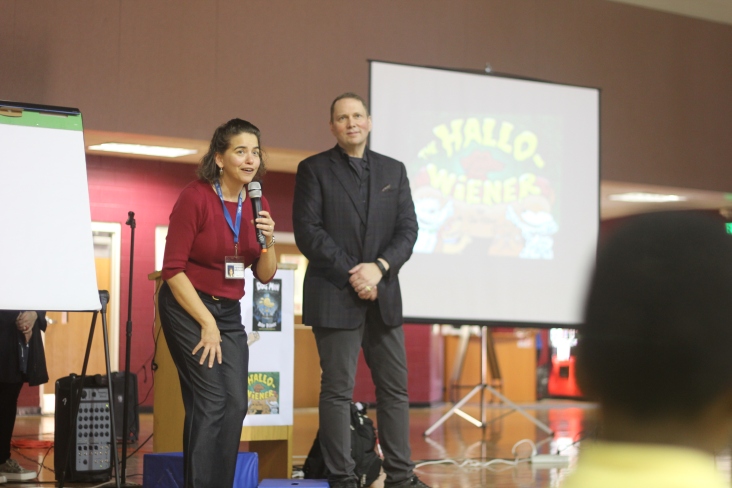 Warren Goetzel, media services coordinator for Atlanta Public Schools, said Pilkey was invited to visit Hope-Hill because of its exemplary media program and location in a historical neighborhood.

Goetzel also noted that Pilkey has been honored as the 2016 Milner Award winner. Established in 1983, the award is designed to promote reading among elementary school children in Atlanta and across Fulton County. Children vote for the author of the books they love to read. The winner is invited to Atlanta and is honored at a program attended by the children.

In addition to thanking Pilkey and his wife, Sayuri, for fostering a love of reading in students, Goetzel said that Tigue did an amazing job ensuring students that were exposed to Pilkey’s works and were prepared for the event.

“I knew Hope-Hill was the right school,” he said. “The overwhelming success of the occasion can be attributed to Ms. Tigue’s hard work and dedication and students’ unbridled enthusiasm. Mr. Pilkey also helped all the students understand that when students are permitted to choose the books they want to read, that is when Reading Superpowers are developed, especially with the most reluctant readers.”

The “Captain Underpants” series includes 12 books, and won a Disney Adventures Kids’ Choice Award in April 2006. As of 2016, the series has been translated in over 20 languages, with more than 70 million books sold worldwide. A “Captain Underpants” film starring comedian Kevin Hart is scheduled for release in 2017. 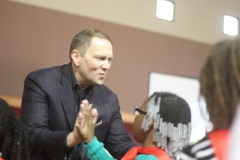 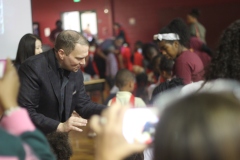