“It feels good,” Davis said after being crowned champion. “I spent a lot of time studying and it really paid off.”

Lily and Jacarri will join Davis in representing APS at the Georgia Association of Educators’ Regional Spelling Bee on Saturday, Feb. 24, at Douglass High School. 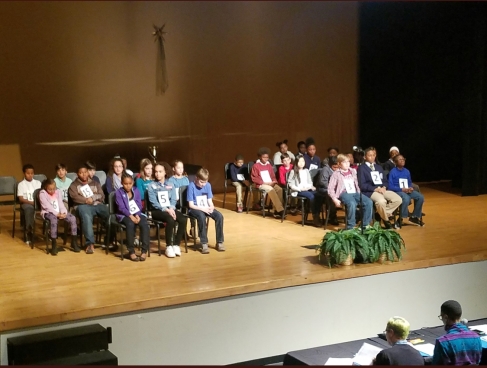 Students from more than 35 schools across the district participated in this year’s spelling bee, competing to spell a bevvy of difficult words, such as tempestuous, gargoyle, requisites, chinchilla, forsythia, peloton, camphor, diphthong, and more.

However, it wasn’t until Davis masterfully spelled the winning word, troika – which means a group of three – that a spelling bee champion was finally named.

“The spelling bee showcases some of the district’s best talent from elementary and middle schools in every cluster, and all of them are really fabulous spellers,” said Jermal Riggins, K-5 literacy coordinator for APS. “We are extremely proud of all of these outstanding students.”