During a special assembly on Tuesday, Aug.30, hundreds of students, teachers and staff at Tuskegee Airmen Global Academy gathered to celebrate the announcement of the school’s new partnership with Morehouse School of Medicine. Thanks to the partnership and a $150,000 grant from the Robert Wood Johnson Foundation, TAG Academy will now receive technology equipment to support its STEM-focused curriculum, as well as parenting resources, and mentoring support for students.

Just like their namesakes –  those elite World War II fighter and bomber pilots who became the nation’s first Black military airmen – Dr. Rice told students that they, too, are destined for greatness.

“We are doing this for you,” she said. “We are educating and training the future health professionals of the world, and we want you to reach your fullest potential and become the best you can be.” 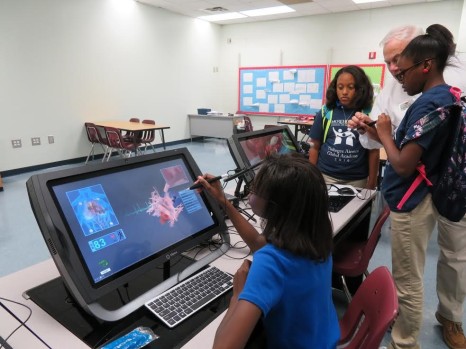 Following the ceremony, Dr. Rice and her guests showered students with gift bags and T-shirts, and later toured the school’s aerospace and zSpace STEM labs, which create real-world, virtual reality systems. Featuring state-of-the art Vizitech monitors and 3-D printers, zSpace allows students to engage and interact with simulated objects in virtual environments as if they are real.